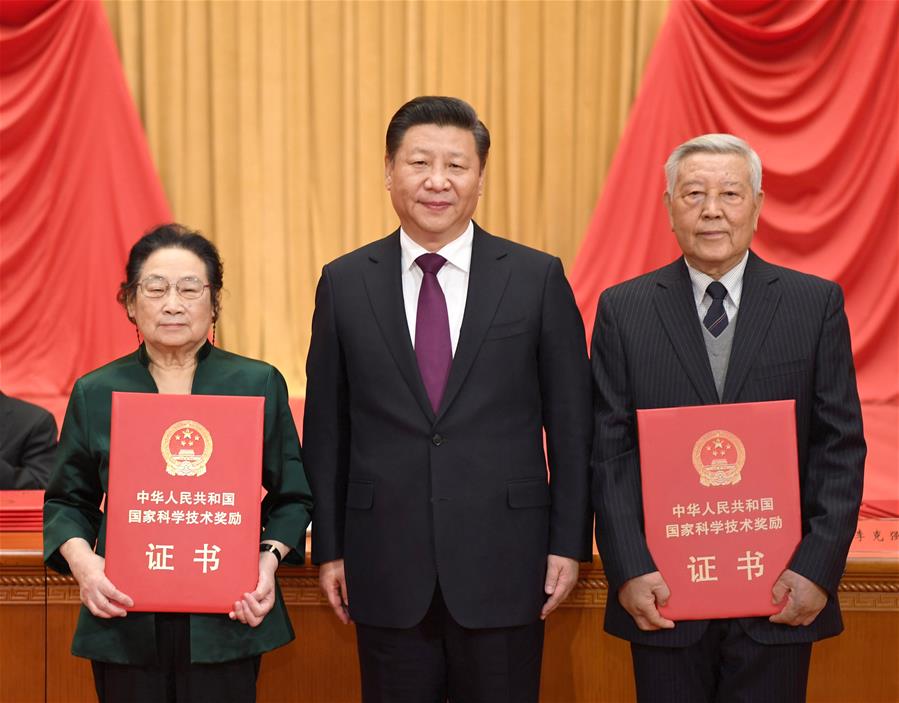 President Xi Jinping presented award certificates to them and offered congratulations at an annual ceremony held to honor distinguished scientists and research achievements.

Zhao is a leading scientist in superconductivity, while Tu won the 2015 Nobel Prize in Physiology or Medicine for her discovery of artemisinin as a treatment for malaria.

Xi and other leaders, including Li Keqiang, Liu Yunshan and Zhang Gaoli, also presented other awards.

While addressing the ceremony, Premier Li Keqiang said China must fully implement the strategy of innovation-driven development, nurturing new growth engines while accelerating upgrade of traditional sectors, so as to maintain growth.

He pledged better services and policies to bolster innovation in science and technology (S&T).

Research institutions, universities and people taking the lead in S&T innovation will be entitled more power in doing their job, said Li.

Distribution policies must be better implemented to honor and reward innovators, Li said, adding that the country is willing to offer opportunities for S&T talent, from home or abroad, to fulfill their ambitions here in China.

Acknowledging the fast growth of emerging industries such as the digital, sharing and platform economies, Li urged prudent supervision to keep the market healthy.
Li encouraged accelerated research and development for new and high-quality products to meet the multilayer consumer demands, and raise the quality and profile of “made in China”.

He also called for enhanced protection on intellectual property so as to create a sound atmosphere for innovation and entrepreneurship.

Presiding over the ceremony, Vice Premier Zhang Gaoli called on S&T workers to follow the example set by the prize winners, and contribute to the country’s drive to become a major S&T power.

Before the ceremony, President Xi and other leaders met with the representatives of the winners.

The ceremony, attended by around 3,300 representatives from the Communist Party of China, state and military organs and S&T circles, honored 279 projects, seven scientists and one international organization with national prizes.

The international S&T cooperation prizes were awarded to five scientists from the United States, Germany and France, and the Mexico-headquartered International Maize and Wheat Improvement Center.